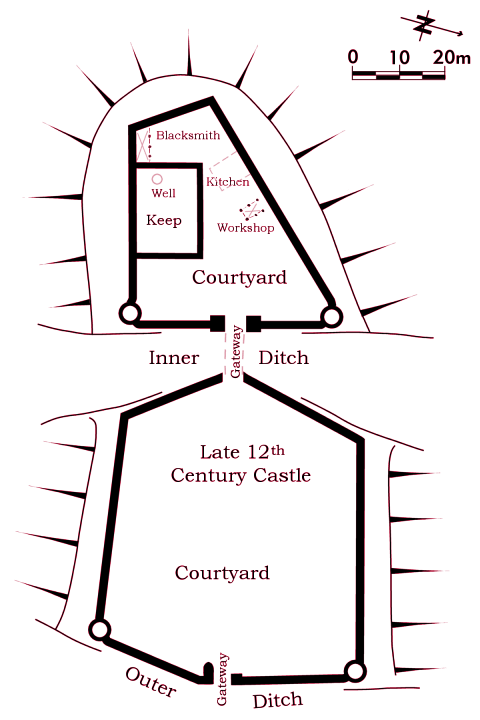 The marriage of Adelicia de Belmeis, heiress to the Tong Estate, to Alan la Zouche brought to Tong the powerful la Zouche family and with the addition of the Belmeis Estates not only saw the increase in the ecclesiastical grants to Lilleshall and Buildwas Abbeys '...accommodation in his (Alan la Zouche) wood at Tong Castle...' but also the need for a larger castle in keeping with his newly acquired and more powerful status.

The enlarging and strengthening of the overall castle defences was achieved firstly by encompassing the front courtyard with a curtain wall, which necessitated the building of another gateway, secondly, the digging of another ditch across the promontory to protect the increased castle area, and, lastly, the building of round watch towers at the north east and south east corners of the Keep area and front courtyard.

Excavation of the outer ditch, especially in the gateway area, revealed a smaller ditch cutting within the later, and larger, outer ditch section, but was of insufficient depth to make it an effective defence in the terms previously discussed for that of an adequate defence. Whilst a wooden bridge would still have had to be used to cross even the shallow ditch, the new 'D' shaped Gateway would have provided adequate defence with the front courtyard being used presumably for communal use and the main defence still in the Keep area.

The excavation of a line of post-holes, inside the Curtain Wall and to the west of the Keep building, with heavily burnt areas from which came 12th century ironwork such as a spear and arrow-heads, suggests that it was used as a blacksmith's workshop, a usual feature within castles of that period. The single line of post-holes pointed to their use as the main supports for a lean-to building against the curtain wall and possibly the end wall onto the Keep building.

Evidence of an early oven floor was located just outside the corner of the Keep building and being under the 13th century kitchen area, placed its period of use during the 12th century even though there were no artefacts to confirm this. Further post-holes for another timber framed building were excavated underneath the later courtyard building and from the heavily burnt sand layers, it could have been used for further industrial use or part of the Kitchen buildings.

Other pits and shallow slots, with a marl sealed sandstone rubble or gravel filling occurred within the Keep courtyard, but their dating, apart from generally being below the 13th century levels, could not be determined because of the lack of any artefacts from within the pits and slots.

Excavations in the demolished gateway area of the inner ditch, apart from locating the basic 12th century ditch cutting, also produced pottery and iron work similar to that found in the Keep area, on the top of the initial sterile sand layer, deposited immediately after the cutting of the bedrock from the inner ditch, which was from either the quarrying or erosion of the newly cut surfaces of the natural bedrock.