Tong Castle in the 18th and 19th centuries 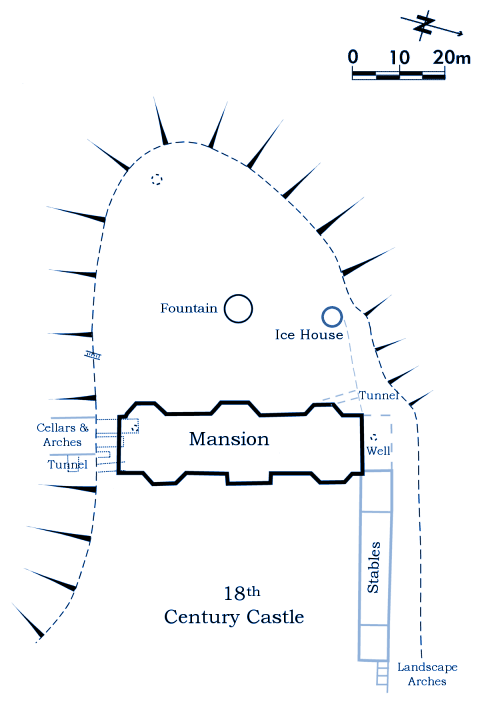 The last Castle or Mansion was built by George Durant, after he bought the Tong Estate from the Pierrepont Family, and along with Lancelot [Capability] Brown ➚, he not only built a building far removed from any others that had earlier been built on the site, but also removed all the traces of the buildings by an overall landscaping emanating from, and about, the new Mansion to eventually encompass Tong itself whilst still retaining the rural look of the area.

The Mansion, variously described as a Country House, a Castle and a Turkish Bath, was built about the foundations of the 16th Century Castle, but the new and more extensive Cellars added more underground passageways, which demolished or cut through most of the earlier foundations. Excavation of the new foundations, which had been built, found them to be of a very in-substantial nature and incapable of supporting the ornate sandstone building for any lengthy period of time.

A Surveyor's report in c.1855, less than 100 years later, recommended that the building should be demolished because it was not fit for habitation. Although the demolition did not finally happen till 1954, when the Mansion was in almost complete ruins, the northern part was lived in up to the First World War, with the rest of the Mansion sealed off for safety reasons.

Although the earlier buildings had been levelled off and covered over by up to a metre of soil and rubble, that did not stop the use of the steep medieval outer walling in the landscaping such as on the south side where a huge Wine Cellar was cut through the wall and bedrock and into the earlier Well, which was found filled in, and the Wine Cellar was reputed to be capable of storing up to 360 dozen bottles of the finest Wines, with a staircase for access to the Mansion. 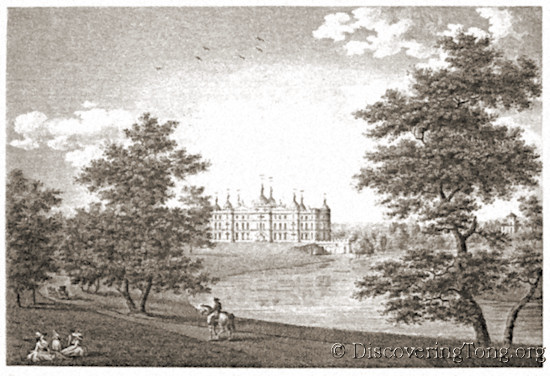 Along from the Wine cellar was a smaller Cellar which had a boiling oven and other structures suggesting its use for brewing and the bottling of beer. Between this Cellar and the entrance to the Tunnel were Landscape Arches, used to extend the ground around the Mansion over the steep walling, and these were used as storage places for gardeners and servants. One of these arches had the pit for the 16th century rubbish chute under its floor, and at right angles to the arches was a further arch, used firstly to extend the landscaping, and secondly, as a boat house for the South Pool.

The entrance to the Tunnel and Cellars made the south side accessible to all the servants working there and provided a useful means of movement along the length of the Mansion underground and out of sight of guests and the Mansion.

The Cellars and Tunnels beneath the Mansion provided a network of access points into the Mansion itself, without the servants and staff having to actually walk about the Ground Floor for other than serving the Lord of the Manor and his guests. Although all the Cellars could not be completely cleared of demolition rubble during the excavation, the main Larders and Cellars were cleared at the north end of the building to enable a general layout to be seen.

The last 'Cellar' was in fact the Servants' Room and had a Fireplace in the inside wall, through which was the entrance to the Tunnel, and in the opposite wall a doorway led to a stairway down to the Stables. The Stables were built against, and below, the steep outer medieval Curtain Wall and a separate inside wall had been built against, and keyed to, the earlier walling. On demolition of the inside wall, damage by Cannon Balls fired at the castle during the sieges of the Civil War was revealed.

Stables were built underneath the steep walling to increase the depth of building and so make them 'invisible' from the Mansion, the floor was cut into the natural bedrock with the drainage channels cut down further and covered by sand and cobbles for the Stable floor. At the end of the Stable building, further Landscape Arches had been built to fill-in the end of the deep Outer Ditch and these had been used to store Horse Carriages with a Blacksmith's Workshop in one Arch and a cobbled Driveway alongside the Arches, Stables and Church Pool.

Also from the Servants' Room, a Spiral Staircase went through the 16th century brick foundations and up to the front of the Mansion, with a hinged iron cover to hide the entrance. Next to the Servants' Room to the west were two further rooms; in the first was a Well which had been cut down to a depth of 9 metres through, and into, another of the promontory's water tables. The Well had been covered later by iron plates on which had been mounted a hand pump, which had been used to draw the water from the Well.

At the back of the Well Room, a blocked-up Tunnel arch was found but this had been sealed off during the building of the Cellars. In the west wall a short stairway went down into a room, along the back of which a 'table' had been built of re-used ornate yellow sandstone to produce a cool-slab. In the end wall a further stairway went down to the lower Stable level, going alongside an arched cellar which support the Cooling Room floor. Apart from some burning at the back of the Cellar it could be assumed that it had been used for storage. 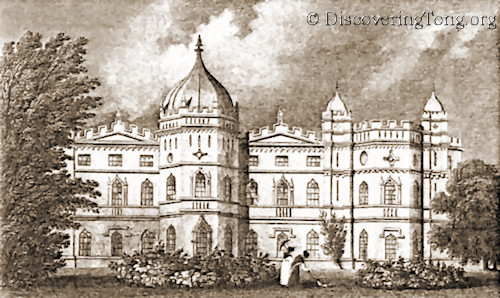 Next to the cellar was a further Landscape Arch which partly supported the entrance to the Tunnel from the north side. From the northern Tunnel entrance a trackway went through an overhanging passage to the Ice-house. During the excavation and removal of the Ice-house to the Avoncroft Museum of Buildings ➚ site, it was found to have been built inside the foundations or cellar of the 12th century Round Watch Tower at the north east corner of the Keep courtyard area. The Ice-house had iron rails across the top for an open floor level for storage of game.

A new Fountain was built over the 17th century one, into the West Lawn, with water from a Ram Pump in the Church Pool Dam providing pressure for a high jet of water from the centre of the Fountain providing an impressive west view from the Mansion down the lawn. Steps from the lawn to the south-west down to a path leading to the boat house and the South Pool. The construction of the South Pool, to the south and west of the Mansion, and the North or Church Pool, sweeping from the Stables onto and beyond the Tong Church, would have provided an awe inspiring view for the guests arriving down the wide gravel drive along the front lawn to the front of the Mansion.

This is the last in the sequence of the nine castle buildings Alan Wharton uncovered. Click here to go back to the first, 11th century Tong Castle or here to go to the index page with information about the Tong archaeological excavation.