About the Census Data

The data are based on the census returns held at the National Archive ➚ it holds copies of the 1841 through 1891 censuses for England and Wales on microfilm and 1901 on microfiche. There are about 500 entries for the parish of Tong for each of the seven censuses that they hold. The census data (1841-1911) are currently available online over the Internet free of charge.

The census records are of variable quality. In some case it is the photocopying process that is poor and in others it is the legibility of the handwriting. There are three sources of error, in the original information capture, the process of copying and also in the interpretation of the handwriting. Often errors on transcription can be spotted by matching the records with other census returns. Having transcribed all the records individuals can be traced over the whole time period 1841-1901.

Throughout this period there would have been a fair number of illiterate inhabitants, unlike modern censuses where people are given a form to be filled in, the early censuses were taken by members of the 'professional classes' walking the parish door to door. Maybe significantly one or two of the census returns begin or end at the Bell Inn. The method of census taking in itself had its problems; there were of course those that saw the census as an intrusion in civil liberties and the government wishing to spy on their private lives. It is not therefore appropriate to have full trust in the data provided. With the moral and political strictures of the time they are not likely to reveal that couples were 'living in sin' or that children were working at too young an age.

There are many anomalies between successive returns, for example, the place of birth can change dramatically. Whether these anomalies are due to the census taker or the individual is pure conjecture. The census for Tong was taken into two parts (except for 1901), bisected by the A41 Newport Road. This divides the parish surprisingly evenly. Most of the censuses have marks and notes added to them some time after they were taken. I presume this is due to the analysis by the UK government. They seemed to be solely interested as to people's occupational group (agricultural, domestic, etc) and where they were born.

Prior to 1841 the census only returned information about the head of each household with just numbers of cohabitants - no names or occupations. These are not held at the National Archive in London. Many returns were lost, it is likely that the records are held at Shrewsbury. Only summaries recorded by J.E. Auden seem to be available now, a few statistics are provided for comparison only.

This was the first full census where each inhabitant was named but the relationship between inhabitants (son, wife etc.) was not recorded but this can be readily guessed in most cases. The records are faint and difficult to read. It uses the old form of 'f' for 's'. The records do not give place of birth, only indicating whether a person was born in Shropshire or not. There is a noted anomaly in ages between 1841 and 1851, it seems that women aged far more than ten years over this period, they adopted the convenient ruse of losing track of their age at the age of thirty. Just as understandable in 1841, boys tend to exaggerate their age perhaps to justify them working on the farm or maybe just to appear more grown up. 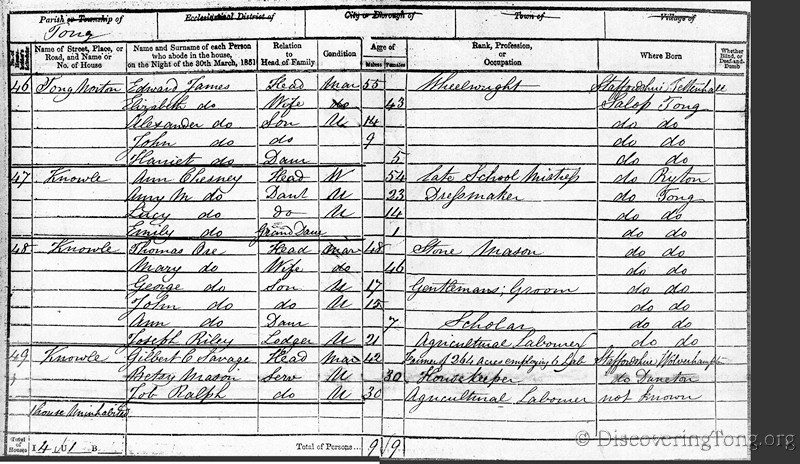 The census data now gives the 'relationship' to the head of the family and whether they are married, widowed or unmarried. It also gives the place of birth. It is generally more accurate. Transcribing the place of birth proved troublesome as the spellings are sometimes odd, this may because many parishioners were illiterate and the census takers may not have known the actual place name (for example Ashby de la Zouche is Ashby de lay Kouche and Wrockwardine is Wrackerdine).

Unfortunately the last but one page is missing and the last page incomplete. For the purposes of the statistical analysis I have assumed that the page contained an average number of people (27) in an average number of houses (7) with average ages. The page probably covered Tong Village and White Oak areas.

The location of the people in the village was hard to decode as the census uses the unhelpful terms of 'Cottage' and 'Farm House' rather than 'Havannah' or 'Forge'. Using the information from 1871 and 1891 it has been possible to associate most of the houses by residents or by logical order of progression around the village.

For comparison some figures are added from the most recent census. The names and addresses are not available for 100 years after the census is taken, all that is provided is some statistical summaries.

To see the Tong census findings please visit the Summary page. Note that this information is not printed in the Book.