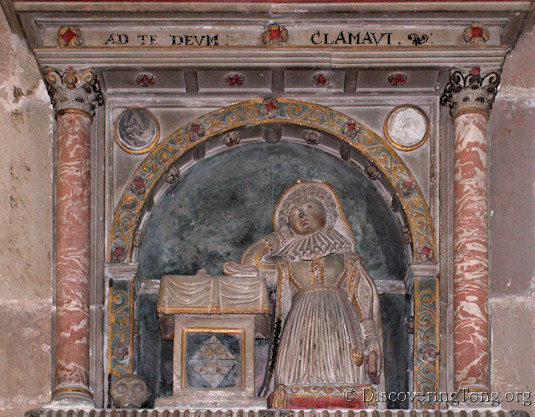 Monument to Ann Wylde (1609-24) daughter of Sir Thomas Harries Lord of the manor of Tong (1603-24). Died ten days after giving birth to a daughter also named Ann, married to John Wylde of Droitwich. Her mother was born Eleanor Gifford (connected to the local Chillington family) herself daughter to Roger Gifford ➚ physician to Queen Elizabeth I. Tong passed on the death of her father to her sister Elizabeth who had married William Pierrepont of Thoresby.

The text on the monument reads: Here lyeth the body of Ann Wylde late wife of John Wylde of Droitwvych in the county of Worcestre Esqur. Eldest Daughter of Sr Tho: Harries of Tong Castle Serjeant-at-Law and Baronet and Dame Ellinor Hys Wyfe whose virtue modestie rare and excellent parts far exceeding her age have fitted for a more heavenly habitation. Leaving behind her these spectacles of griefe and pledges of true affection She died the 6th May in the yeere of our Lord 1624 and of her age the sixteenth being then newly delivered of her first-borne.