The Great Bell of Tong 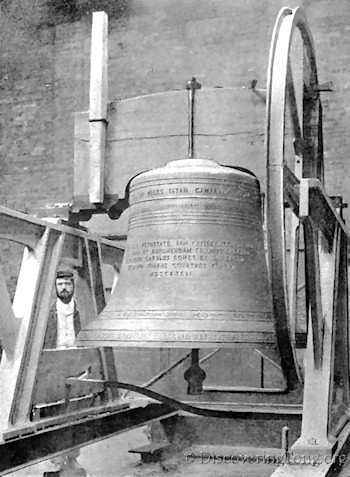 The church tower has eight bells. The bottom chamber houses the Great Bell of Tong. This was given to the church by Sir Henry Vernon and “a rent out of his manor of Norton for the tolling of it when any Vernon comes to Tong”.

A visitor to Tong in 1720 wrote:The inhabitants here boast of nothing more at present than a great bell famous in these parts for its bigness.

Translations of what are believed to have been the original Latin inscriptions read: Henry Vernon - To the Glory of God Almighty, the Blessed Mary and St Bartholomew Henry Vernon Knight caused this bell to be made 1518

According to the churchwarden’s accounts the bell was probably broken before 1635 and was recast in 1720 by Abraham Rudhall of Gloucester. Its weight was quoted in 1763 as being 2 tons 8 cwt but when weighed in 1892, on its way to be recast by J. Taylor of Loughborough (having been cracked in 1848 during the Ash Wednesday service) it was found to weigh less than 2 tons 2 cwt. During the recasting, additional metal was added and the bell now weighs 2 tons 10 cwts.

The bells are rung from the church floor rather than a ringing room in the tower.